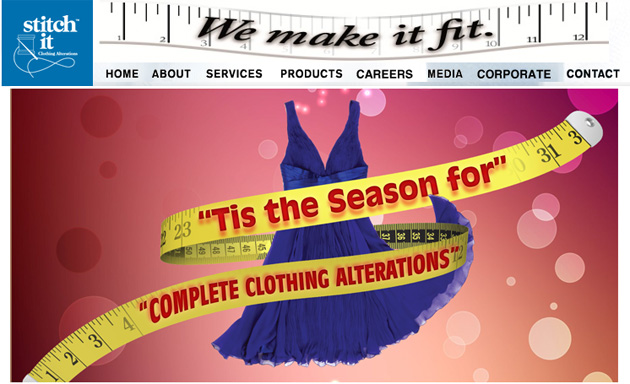 Stitch It Canada’s Tailor was conceived in the early 1980’s when owner, Alain Baird, started questioning why customers were coming to his clothing store and asking if he would do their clothing alterations. Research revealed that the existing clothing alteration shops were inconveniently located and inconsistent in their service offering. A void in the marketplace was identified for a professional clothing alteration service, located in shopping malls as a convenience to the shoppers and retailers, while offering consistency of Service, Price, Quality and Turnaround. It took a while to convince the mall developers of the need for a professional clothing alteration service, however, perseverance finally produced a location in the Square One Shopping Centre in Mississauga, Ontario and the first Stitch It Canada’s Tailor store opened on Dec 9, 1989.

Powered by the innovative ’Pant Hems Done While You Wait’, success was immediate and customers lined up out the door and into the mall. To meet its growth potential, Stitch It formed an association with a major retail conglomerate and they grew Stitch It to 86 stores. During this time together they tested another alteration concept and opened 10 value priced alterations stores named Sew Right, purchased a competitor; Needle N’ Thread and opened four Can Do Clothing Alterations in Minneapolis, Minnesota. In 2003, Alain was given the opportunity to re-purchase majority control of the company.

You will find Stitch It in these categories: