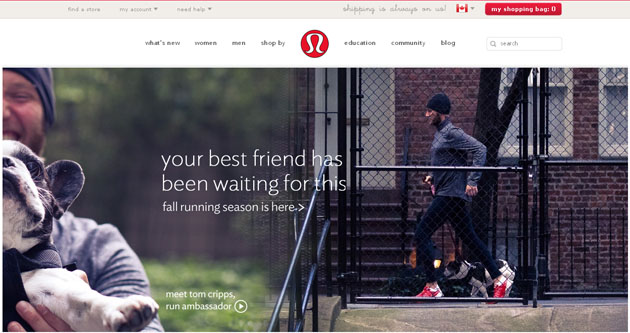 After 20 years in the surf, skate and snowboard business, founder Chip Wilson took the first commercial yoga class offered in Vancouver and found the result exhilarating. The post-yoga feeling was so close to surfing and snowboarding that it seemed obvious that yoga was an ideology whose time had come (again).

Cotton clothing was being used for sweaty, stretchy power yoga and seemed completely inappropriate to Chip, whose passion lay in technical athletic fabrics. From this, a design studio was born that became a yoga studio at night to pay the rent. Clothing was offered for sale and an underground yoga clothing movement was born. The success of the clothing was dependent on the feedback from yoga instructors who were asked to wear the products and provide their insights.

The lululemon name was chosen in a survey of 100 people from a list of 20 brand names and 20 logos. The logo is actually a stylized "A" that was made for the first letter in the name "athletically hip", a name which failed to make the grade.

Founded in 1998, lululemon's first real store opened in the beach area of Vancouver BC called Kitsilano, in November of 2000. The idea was to have the store be a community hub where people could learn and discuss the physical aspects of healthy living from yoga and diet to running and cycling as well as the mental aspects of living a powerful life of possibilities. Unfortunately for this concept, the store became so busy that it was impossible to help the customer in this way in addition to selling the product.

So the focus of training shifted solely to the lululemon educator or staff person. Our goal was to train our people so well that they could in fact positively influence their families, communities and the people walking into our stores.

Although the initial goal was to only have one store, it was soon obvious that to provide a fulfilling life of growth, family, salary and mortgage for our amazing staff, we would have to provide more opportunities. It was really a matter of grow or die because active minds need a challenge.

The training program was such a success that the lululemon people have created a life for themselves that most people could only dream of.lululemon is a company where dreams come to fruition.

You will find Lululemon in these categories: