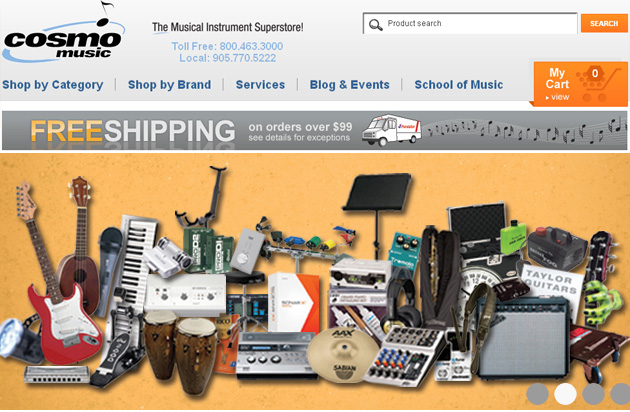 Cosmo Guitars, a small business started by Tom Hebert, began in 1966 importing guitars from Italy and Japan. Tom was fresh out of the Air Force and itching to pursue a business venture in the area he was most interested in…music. Tom had been involved in bands while in the Air Force and his passion was the guitar.

Although importing guitars was promising, in 1968 Tom realized the added potential of his Sheppard Ave location in Downsview and opened the first Cosmo Music. Selling mostly the guitars and accessories he was importing the store grew.

In 1970 it was obvious that retail was what Tom enjoyed. He stopped importing guitars and continued full steam ahead opening up a small music school and broadening the scope of musical instruments sold in his Downsview store. This is where the story of Cosmo Music as we see it today began. In 1971 Cosmo Music moved to Richmond Hill and took over the local Mundinger Music location. Richmond Hill was a much smaller town but with the bigger store and Yonge Street locale Tom was thinking into the future. The new store already had a large lesson studio (65% accordion students!) and big potential for future growth.

You will find Cosmo Music in these categories: