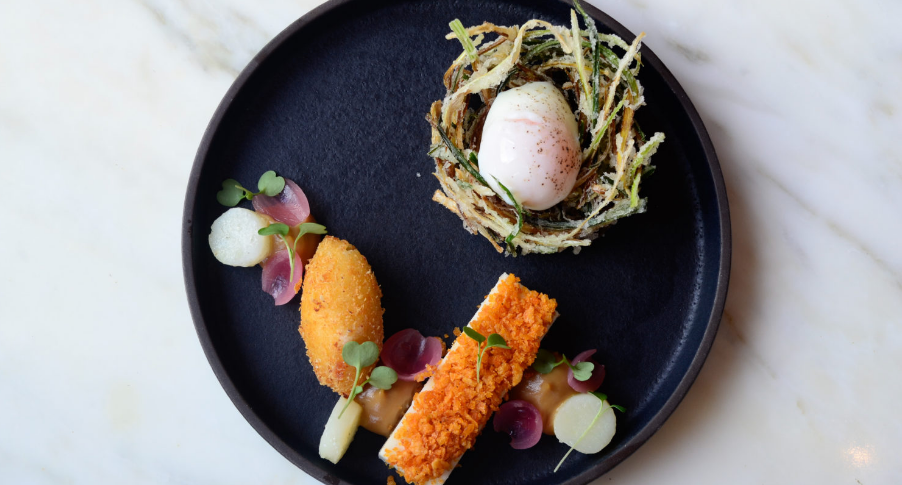 Bauhaus Restaurant was inspired by the early 20th-century design movement “Bauhaus” translated to “construction house” which was famous for its unique approach to architecture and design where every form has a function.

Using these principles for each dish on the menu, the chefs at Bauhaus source only the best quality ingredients, staying true to their form and matching them with flavors that all have a function on the plate.

The Chef Tasting menu features the option to select four or six courses and showcases the creativity and imagination of the chefs.

Considering how close Germany is to Italy, France, Austria, Spain you can see influences from all these rich culinary countries within the tasting menu dishes while creating its own genuinely unique style.

The A La Carte menu has the option of choosing individual items from the tasting menu, while the German Classic menu is a take on traditional German cuisine; this menu has the comfort and heart of a German grandmother’s kitchen with a modern touch.

Dishes such as sauerbraten and roulade with sauces rich in red wine and meat braised for days.

Bauhaus has had the honor of being highly-acclaimed internationally recently it was listed as a restaurant to watch by The World’s 50 Best Restaurants’ Diner’s Discovery Series.

The list is considered the ‘next generation of dining destinations.’

This past year Bauhaus was listed as one of the best German bars and restaurants around the world by CNN, and as part of the new global face of German cuisine by Wine Enthusiast.

You will find Bauhaus Restaurant in these categories: